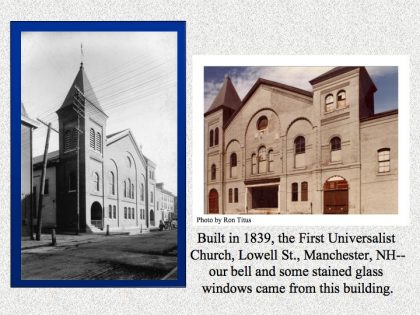 We are a church with roots in two historic congregations. In 1825, the First Universalist Society at Amoskeag was founded by Dr. Oliver Dean. Not long after, in l833, the First Universalist Church of Bedford and Goffstown were organized.  In Manchester, in 1840, the Universalist Church was built at 30 Lowell Street on land donated by the Amoskeag Manufacturing Company. The Fire Department had access to the chapel so that they could ring the bell for fires. Then in 1914, this thriving Universalist congregation built a beautiful fieldstone church at 669 Union Street in the block between Prospect and Myrtle streets. Into it were placed the stained-glass windows, pews, and the bell from the previous church. 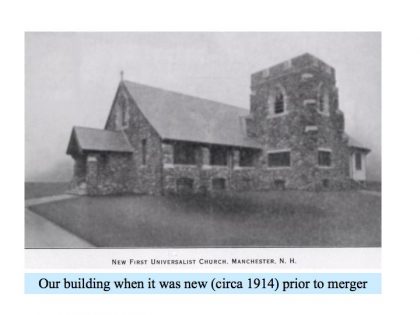 Meanwhile, in 1842, Ezekiel Straw and Daniel Clark had hired the Manchester Town Hall for three dollars a Sunday so that a small group of people could gather there to hear “Unitarian preaching.” By the following year, thirty-nine people in the group hired a Reverend Wellington, and they rented a small chapel. That chapel and one half a brick building used as a parsonage, was eventually moved to another location downtown. A fine new church, located on the corner of Beech and Concord streets, was built in 1872 on a lot donated by Amoskeag Mills. The membership over time included three governors, five mayors, and three judges.

In the 1940s, many Unitarian and Universalist churches across the country were merging. Unitarians and Universalists have similar and compatible theologies; both saw the advantage of cooperation and shared space. In 1953, the Universalists welcomed the Unitarians into the stone church on Union Street. Bylaws for a Unitarian Universalist Church were accepted in 1957; the  federation was made legal in 1965. The sale of the Unitarian church building in 1964 created an endowment for the combined society, and in that same year an addition which blends harmoniously with the original building was built onto the north end of the stone church. The Reverend George Niles, minister for 20 years, oversaw the building of a new parsonage at 1353 Chestnut Street.

The Reverend Elium Gault served from April 1967 to June 1987. When he and his wife, Donna, moved into the parsonage, two sons, Bert and Jim, were already on their own, but daughter Patti was still at home until she graduated from high school in 1974. Elium’s ministry emphasized liberal religion and humanism. He strongly supported separation of church and state. He provided abortion counseling before Roe vs. Wade, and continued to support the right of choice afterwards. He was an active member of the Greater Manchester Clergy Association, and was regularly involved in the New Hampshire/Vermont Unitarian Universalist District organization (NH/VT UU District.) Since his retirement in 1989, Elium Gault, a widower now, has been our Minister Emeritus. He lives in Hazlet, New Jersey.

The congregation voted on and supervised a major remodeling of the Fellowship Hall and downstairs kitchen in 1972-73. The church sanctuary was completely remodeled in 1977. The pews were replaced with free-standing chairs, a stage replaced the chancel, the ceiling was insulated, the floor was carpeted, and the lighting system redesigned. In 1982, a Grand Piano was purchased.  When Reverend Gault retired, the congregation called for an interim minister, the Reverend Richard Woodman, to serve for a year. Dick helped to bring the church into the age of technology by introducing computer systems to the office.

In the spring of 1988, UU Manchestesr called Dr. David Phreaner as our next settled minister. During his ministry, the church enjoyed significant increase in membership and active involvement in the NH/VT UU District as well as the Unitarian Universalist Association (UUA). The Adult Religious Education program grew tremendously both in attendance and variety of programming.

When David Phreaner resigned in April, 1993, the decision was made to spend a year without a minister. That one year became three years. Working in the way of many congregations without ministers, a Program Committee organized the Sunday services. We obtained about one-third guest ministers, one-third guest speakers, and one-third church members to lead services.  Two consulting ministers served the church in this transition period. One was the Reverend Alan Deale, a retired UU minister. He attended Executive Board meetings, was available for pastoral care, provided advice and filled the pulpit once a month. The other was Tricia Tonks, a student minister from Andover Newton Seminary. She sat in on some of the meetings, and also preached once a month. During all three years without a settled minister the church continued to offer varied Sunday morning worship services, provided church school for our children and lively programs for adults. There was continued involvement and attendance at NH/VT UU District events.

In 1995 the church applied for and received a grant from the Hunt Fund (a local philanthropic fund in which the UU church is a named grantee) for money to repair the beautiful stained glass windows in our sanctuary, and this work was accomplished. In the summer of 1996 work was done on the parsonage with much volunteer labor from church members. The kitchen was updated, floors were refinished, new storm windows installed, and the exterior was painted.  In 1996 the Reverend John Gilmore began his ministry with many home visits to members and friends. His thoughtful Sunday services regularly showed his delightful wit and strong intellect. John held “Meet the Minister Brown Bag Lunches” once a month, and established Vespers Services and many Adult Religious programs.. After nearly five good years of ministry in Manchester, he decided to leave parish ministry and follow his earlier vision to work full time with disadvantaged city youth. He and his wife, Fran, moved to Lowell, Massachusetts with sad but fond goodbyes from the congregation.

In 1998, the church voted to accept the Reverend J. Chandler Newton as an official Minister Associated. While he had been in the Manchester area serving as chaplain, first for Hospice, then for Eliott Hospital, Rev. Newton was an ordained UU minister, and a member of UU Manchester. This vote affirmed a connection between Chan’s ministry and the congregation. In 2005, Chan moved away from the Manchester area and resigned from this position. Sadly, Chan died in 2011.

In 2000, the congregation decided to sell the parsonage on Chestnut Street.  Many churches were abandoning this tradition, as more and more 20th and now 21st century ministers seem to prefer to find their own living quarters.  A capital campaign raised funds for another huge remodeling project to make the church handicapped accessible with a new lift (elevator) by the stairs in the church lobby, adding new restrooms, a new church school classroom, and a reconfiguration of the lounge.

In May 2001, the congregation welcomed the Reverend Mary Wellemeyer.  A graduate of Andover Newton Theological School, she was ordained in 2000 at First Parish, Unitarian Universalist, in Brookline, Massachusetts. At UU Manchester, she started a program of Small Group Ministries, strengthened the Adult Enrichment program, and increased Sunday attendance. She was active in the Greater Manchester Clergy Association, the local chapter of the UU Ministers Association, and the Board of Directors of the NH/VT UU District.

After eight years at UU Manchester,  Rev. Wellemeyer chose to pursue interim ministry. In 2009, UU Manchester welcomed our own interim ministers, the Reverends David Boyer and Stephanie Nichols, a married team of co-ministers. They were very active in helping our congregation sort out issues where there had been conflict. A key recommendation of Revs. Boyer and Nichols was that UU Manchester consider a part-time consulting minister. Although this was a painful decision for the church to make, a majority of the congregation decided to make this change in order to stabilize our finances in the middle of a poor economy.

In the fall of 2010, we welcomed our consulting minister, the Reverend F. Jay Deacon. He stayed with us for two years before being called to full-time ministry in Rhode Island. Afterwards, UU Manchester enthusiastically appointed a Search Committee to return our community to full-time ministry and UU Manchester soon after welcomed the Reverend Patrick McLaughlin to settled ministry in 2013.